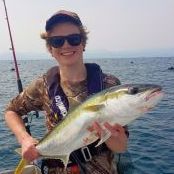 Topwater Bass Fishing Is So Much Fun!

By JahmonW, March 24 in Fishing Reports