Learning to Fish during Lockdown 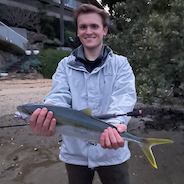 By pscarey,
Thursday at 01:02 PM in Fishing Reports